Analysing the evidence previously collected, it appears that some of the Ottoman experiments that escaped from the secret facility are living in the sewers beneath Sibenik. They seem to be controlled by some sort of organising intelligence (presumably one of the more successful Ottoman “experiments”).  It would also appear that the experimental facility was using a Starstone as its energy source, which the escapees have taken with them.

The sewer system empties into the old 16th century water cisterns beneath the old citadel and it seems that the creatures have made their base there. It can be assumed that the Ottomans have made the same deductions, so it is imperative that the ARSS team find the creatures’ lair first. The team’s priority is to gather intelligence on the Ottoman’s experiments and to retrieve the Starstone.

The Ottomans will be sending in their own operatives to retrieve the Starstone and destroy whatever evidence exists concerning the activities of the experimental facility. Assume any Ottoman operatives encountered will be hostile.

Set Up: The sewer system and old water cisterns beneath the streets of Old Sibenik.

Deployment: Deploy all PCs in any tunnel along the southern edge, then deploy foes randomly but not closer than 8” to any PC (if a foe appears closer than 8” from a PC, place it 8” away). From the outset the PCs are aware of a sensation of undefined dread – All must take a DL10 Horror check.

Trap: The PC has stepped on a sticky substance produced by one of the giant frogs DL12 strength test to break free. If caught a giant frog emerges from the nearest cover and attacks the trapped PC.

Ambush: A giant lizard emerges out from the nearest cover and attacks the closest PC. If the PC is in the water the ambusher is a crocodile.

At Our Back: 2-5 Ottoman Militia enter along the southern edge.

Game Event: An Ottoman Officer and 3-6 Ottoman soldiers enter from the Southern edge.

*only each of these available. If already in play a crocodile enters instead.

That Will Come in Useful: A leather case is found.

Lair: A bizarre collection of items stolen from the city with a Starstone at it’s centre. If Mr Needle has not appeared by the time a PC reaches the lair, he will be in it!

Victory: The game ends if Mr Needle is killed and the Starstone is retreived, or if all PCs are off table or dead. 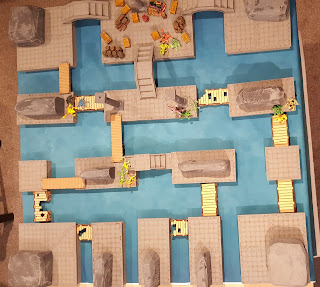 The table layout. The PCs will be entering from the sewer tunnels at the bottom of the picture. 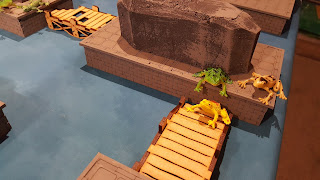 Waiting for them are some of the bizzare experiements escaped from the Ottoman research facility. Giant frogs that exude a sticky gel to snare their prey.... 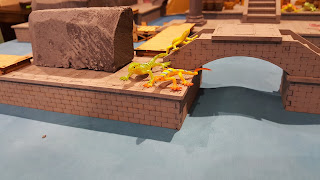 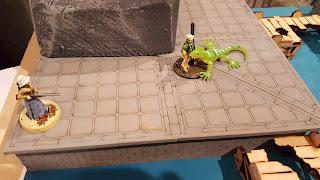 Not a brilliant start, Singh moved forward and shot an approaching lizard, but Lady Amelia failed to activate. She succeed in generating more lizards and a band of Ottoman militia, all of whom entered down the sewer system, fortunatly in different tunnels to the PCs. Then, at Singh's second activation, he was ambushed by a giant lizard but swiftly despatched the beast. 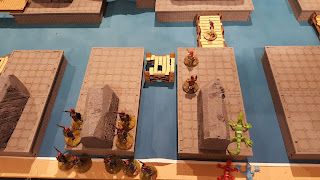 Further along Jack and Maisie moved forward at speed but the Professor fell behind. 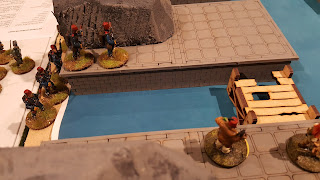 Hearing the voices of the Ottoman militia comming up behind him must of startled the professor, because he carelessly steped into a sticky trap left by one of the giant frogs. The creature leapt up from it's hiding place, but the Professor swiftly killed it. The Ottomans were in sight now and bullets were whistling around him. He couldn't move his feet.... 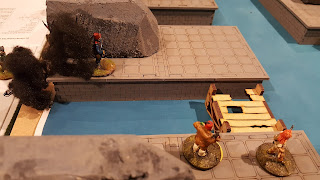 ...but he could still use his arms. An exploding globe took out most of the troop, Maisie rushed back to help her uncle and shot down the last Turk. 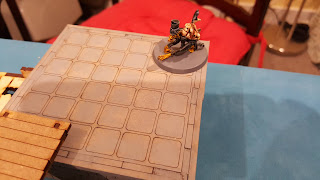 Now a strange, meancing creature slunk out from the shadows. 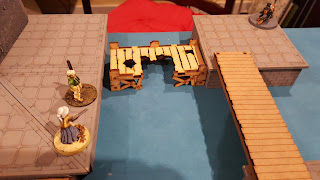 "What on Earth is that, Singh?"
"I don't know my lady, but I suggest we shoot first and examine the body afterwards!" 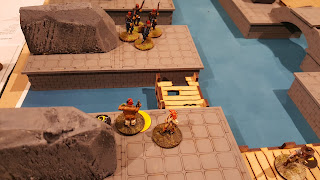 Yet more Ottomans ermerged from the sewer tunnels, but a second exploding glode dealt with them. With Maisie's aid the Professor managed to extract himself from the sticky trap. 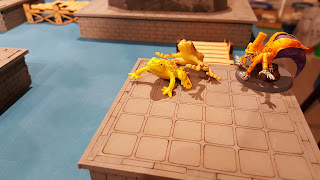 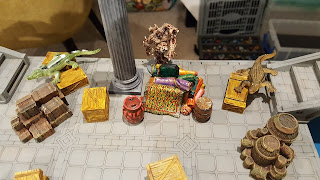 A succession of poor actiavtion rolls and unlucky cards was bringing all manner of creatures out of the dark. The ferocious hybrid enered by the lair, flanked by two crocodiles! 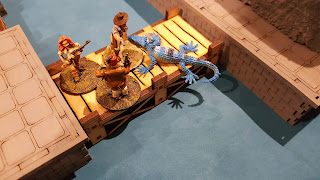 Jack was wounded by a lizard before he managed to kill it. But he recovered from a combination of the Professor's healing skills and a draught of Mrs Pinkman's Restorative Compound. The Professor healed his own wound with a second draught of the Compond. 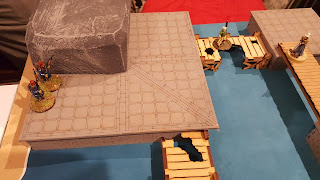 Two Ottoman militia came out of the sewers behind Lady Amelia, who turned and blasted them away with both barrels of her shotgun. 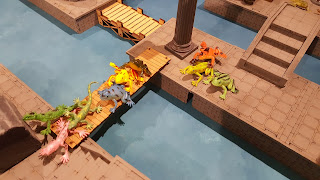 That's a lot of creatures heading towards the PCs. 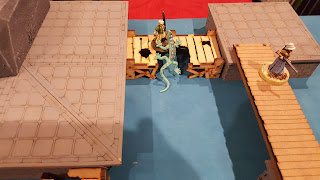 As Lady Amelia started reducing their numbers, Singh was ambushed by a viscious lizard. 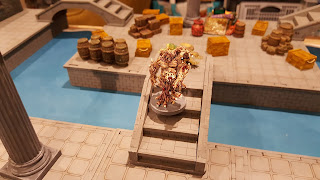 The Hybrid advanced across the bridge. 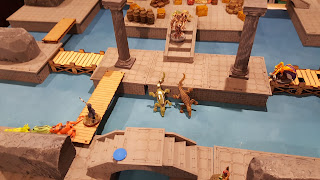 Preceeded by the two crocidiles that slipped into the water. The blue marker is an interesting old leather case that the Professor had just spotted. 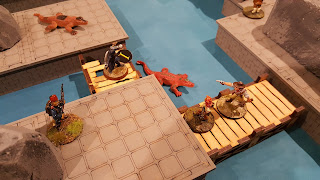 As the Professor rushed off to grab the case, Maisie and Jack covered the rear against a plethora of different targets. 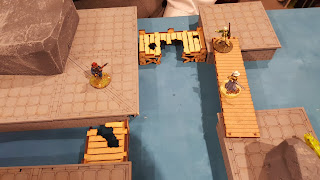 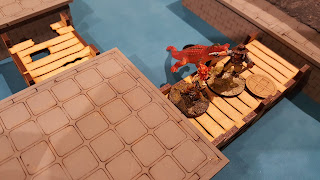 Jack wasn't having much luck with his revolver today. Not only was his aim off, the weapon jammed just as a crocodile reared up out of the water besides him! He took a nasty gash on the leg before he had despatched it with his sword. 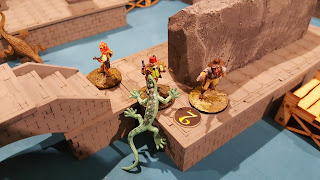 As the trio regrouped the Professor was ambushed by a giant lizard but managed to fight it off. 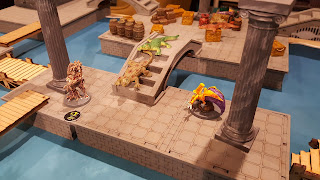 Maisie was otherwise occupied, putting bullets into the large ugly thing with multiple mouths which was rushing towards them. Unfortunately some of her shots just ricocheted of the creature's tough hide. 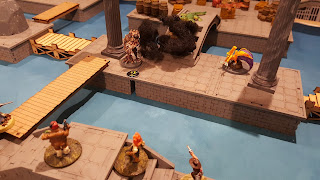 Fortunately her uncle had one exploding globe left and used it to excellent effect, not only blowing the Hybrid to atoms, but also taking out the crocodiles just behind him (it?). Joined by Lady Amelia and Singh, the party now caught the bizzare Mr Needle in a crossfire and killed the creature, filling it with lead before it could act. 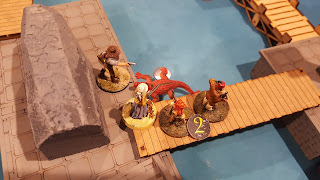 The party pressed on, but a crocodile started clambering up out of the water. It's appearance obviously put the party off their aim a touch as it took a hail of lead and buckshot to kill the beast. 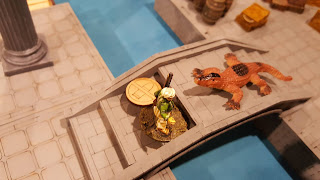 In the meantime Singh, pressing ahead of the rest, discovered the worst moment for your rifle to jam! 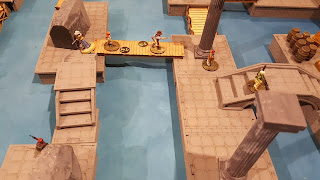 It was for just such an eventuality that Singh had started carrying a revolver and he put a bullet into the croc. Maisie was able to finish it off with a well-placed shot to the head! 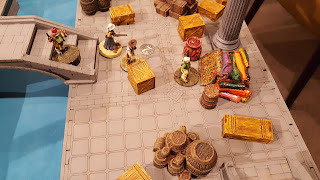 With the way forward clear, they party rushed into the lair and Singh grabbed the Starstone and thrust it into his pack. 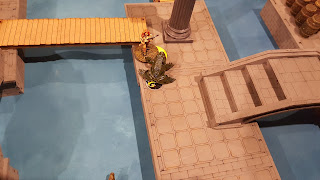 Maisie found herself caught in a sticky trap and suffered a bite from the lurking frog (fortunatly she was poisoned by the creature this time. Jack rushed back to her aid and killed the frog, then pulled Maisie out of the sticky mess.

The party now made a swift exit, which is just as well when you consider what was coming up behind them! 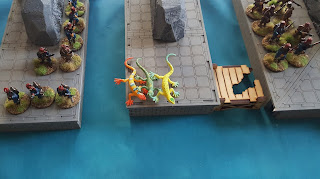