I recently managed another game of  The Pikeman's Lament with Imperialists fighting Ottomans, somewhere in Eastern Europe. We played the Beating Up Quarters scenario with 36 point companies. 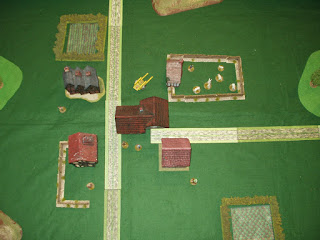 A quiet, sleepy hamlet in the eastern part of the Empire. 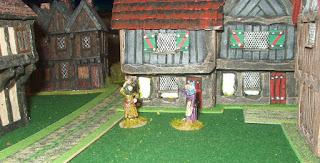 Women gossip as they go about their daily chores. 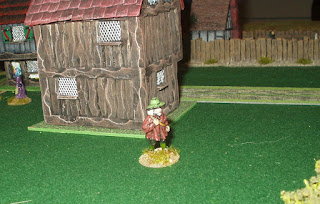 The menfolk set off to work the fields. 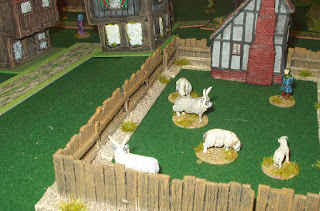 Or tend to their livestock. 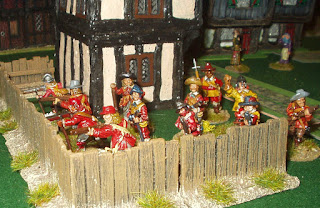 Their lives are made harder by having a company of soldiers billeted in their homes. But the garrison makes them feel safer...or are they? 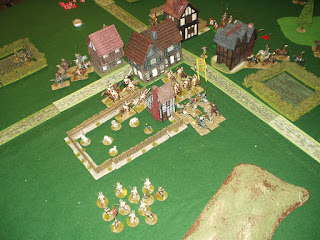 At sunrise the sentries cry out in alarm as shrieking Ottoman cavalry swoop in from all sides. As dozy soldiers struggle out of their quarters, volleys of shots cut them down. The red counter marks a unit of pike in disarray behind the house, fired upon by Ottoman infantry just out of the picture. 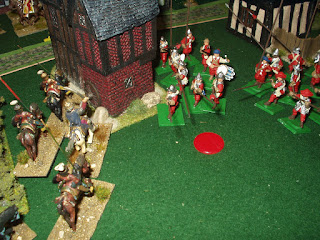 A second unit of pikemen stumble out of the house the have been sleeping in, just moments before Ottoman sipahis set the roof alight. 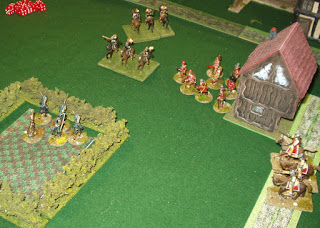 The Imperialist Captain realises that the Ottoman commander is isolated with his Janissary bodyguard, so leads a unit of musketeers forward to support the cavalry trying to ride the Turk down. The Janissaries fight like heroes, throwing back repeated cavalry charges with heavy losses, then cutting down the opposing musketeers with withering volley. The Imperialist captain stands, bareheaded, among his musketeers just seconds before a well aimed musket ball blew the top of his head off! 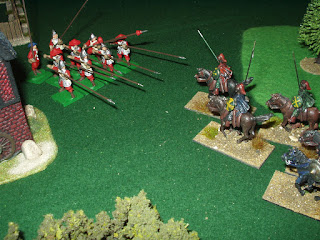 The pikemen, now rallied, charge a unit of Turkish horse. Unfortunately they are not sipahis, as the pikemen thought, but Tartars (elite dragoons!) who deftly avoid the charge and cut them down with accurate bow shot. As casualties mount the pikemen's morale collapses and they flee in rout. 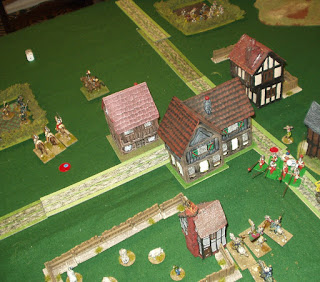 The final moments of the game. On the right of the picture the last unit of pikemen have just fallen back in disarray after being shot up then charged by a unit of sipahis.  To the left the Janissaries still stand defiant against the Imperialist cavalry. At this point we called it a Ottoman win, the Imperialist only had 2 figures on the table that were not in disarray, whilst half the Ottoman company was still effective, including 2 units at full strength.

Another great game using these fun rules.
Posted by Sun Jester at 03:39