I had the Frostgrave gang (Mark, Henry and Colin) over for a game to try out some of Mark's ideas for our new Frostgrave campaign. We have played two previous Frostgrave campaigns in monthly games and Mark has been inspired by my new Streets of Venice layout.
He has added in ideas for drowning, creatures/dangers in the water etc, which we want to iron out before we start our next campaign.

Here's a few pictures of the test game in progress. 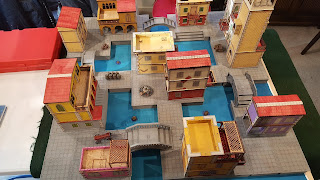 The whole layout, the four warbands will come on from each corner. 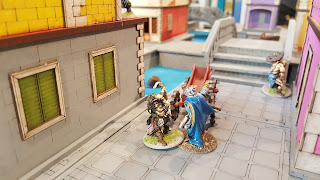 My wizard throws a Bone Dart at Henry's wizard. First turn, first spell of the game and I killed him outright!
Later Henry realised that he had got his sums wrong and fact he was still alive with 1 HP left. 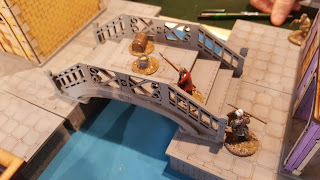 Henry thought, why run all over the place after the treasure, when you can magic it closer to you? Just as well no one had a Crumble spell, his treasure could have ended up in the canal! 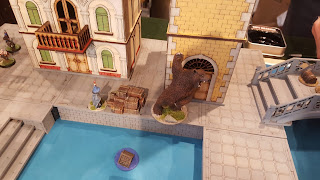 Mark brought a long a BIG bear (too big for a lot of the gaps between buildings in fact!). 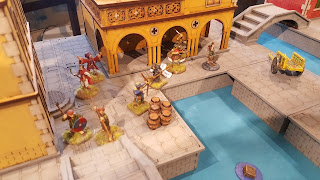 Colin's warband get into problems with zombies (only 1 zombie by the time the picture was taken). 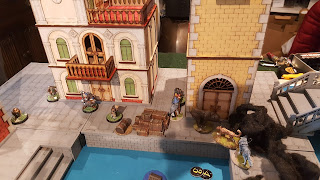 Mark's animal companions gang up on a wandering leopard (which proved to be tough, killing the bear and another of his soldiers before it was finally killed). 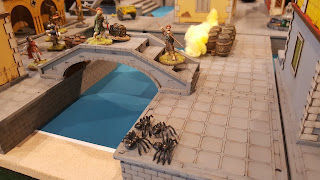 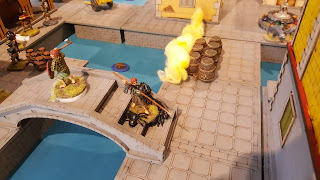 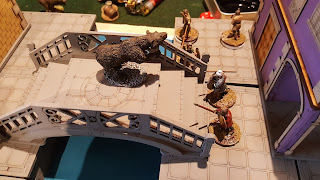 Another (wild) bear turns up and chases after Henry's warband.

A lot of fun, even if we did have to keep stopping to write down notes and new ideas.
Hopefully another game will be enough to tighten the new rules up and we can start the campaign!